30 Years of Bard on the Beach 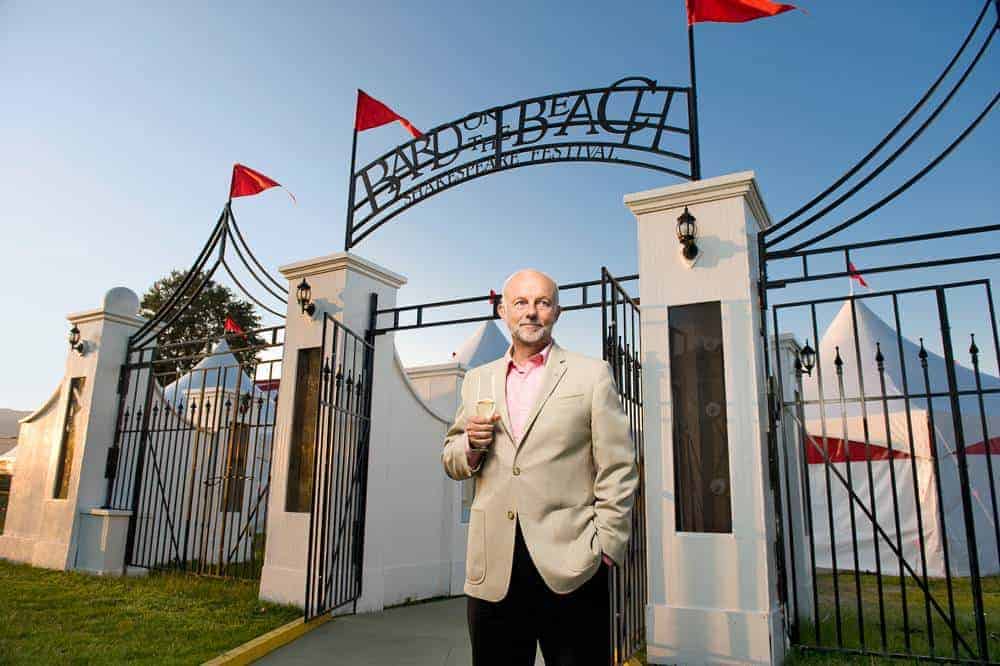 Every summer, Vanier Park transforms into Vancouver’s version of Shakespeare’s Globe Theatre. Vancouverites and visitors to the city gather by the hundreds around glorious tent-covered stages that overlook English Bay. Beneath the tents, everyone is protected, but no one is set apart from the night. This is theatre under the stars and Vancouver, and its coastal rainforest temperament, are part of the cast. Iambic pentameter floats on the salted breeze, and the occasional seabird makes a guest appearance on stage.

Thirty years ago, the director of Bard on the Beach, Christopher Gaze, could never have guessed how fervently the festival would be embraced by the people of Vancouver. In 1989, he was a classically trained 30-something actor pondering the future of his career. He’d been in the business for 17 years and was doing “fine,” but fine wasn’t good enough anymore. Gaze no longer wanted to drift from role to role, he wanted to take ownership of his work. That meant creating something new, so he pitched an idea to some of his fellow actors: “Let’s start a Shakespeare Festival in Vancouver.”

With no pay, just passion, Gaze and his friends pulled it off. From those humble beginnings, Bard on the Beach has become part of the quintessential Vancouver experience and a symbol of the city’s love and commitment to arts and culture.

“Bard has been my life, and the life work of many people, but I think the citizens of Vancouver feel and believe it belongs to them,” says Gaze.

“Almost 110,000 people came to Bard last year, and we’ve had nearly two million people attend over the years. To have such a large Shakespeare Festival here, on the West Coast of Canada, is rather remarkable.”

Part of the wonder of Bard is Vancouver itself. The city doesn’t take stage directions, meaning actors must sometimes adapt to the city’s whim.

During Bard’s second year, Gaze recalls how a foreboding thunderstorm rolled across English Bay towards a production of “A Midsummer Night’s Dream.” Horizontal rains bombarded the tent. Water ran down the stage. The thunder clapped so loudly that no one could hear a word. Gaze went out on stage to call a time out right as Puck was casting a spell. The actor, realizing what was going on, ran to the backstage exit where, out of sight, a mattress had been set. He leapt into the air to make a dramatic exit and, at that moment, a flash of lightning lit the sky freezing Puck magically in the air. Gaze and the audience stared, transfixed. When the flash faded, Puck was gone.

Over the years, Gaze and his team have used the backdrop of Vancouver (in slightly more predictable ways) to create truly iconic experiences. Over 20 years ago, they decided that the city’s annual English Bay fireworks festival was the perfect stage for a one-of-a-kind theatre, dining and firework experience. The first firework barbecue treated 750 guests to a deliciously West Coast-inspired salmon barbecue, cooked perfectly, outdoors on the spot.

The popularity of the event, and the opportunity it presented for people to come together and break bread, spurred further collaborations. “As our needs have grown, Emelle’s has grown with us,” says Gaze. “They handle all of our catering, and whether it’s an opening night, a closing night, a marquee event, a picnic or the firework barbecue, everything is presented immaculately with an ease and a warmth that we’ve really come to rely on.”

Today, Emelle’s salmon barbecue feeds 1,000 people per night on three separate nights. “One of my favourite things,” says Gaze, “is sitting down at the barbecue and sharing a divine dinner and a lovely bottle of Chardonnay with whoever is at the table. It’s fantastic. I never miss it.”