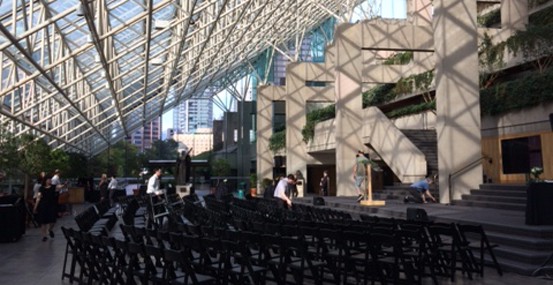 In the Great Hall of the Law Courts Inn, Emelle’s offers service that rises to the best of world-class hospitality standards.

After 17 years spent working in hospitality for the Hilton Orlando in Florida, the home of Disney World, Steve Chamli decided it was time for a change. He moved to Vancouver to assume the role of general manager for The Law Courts Inn, a club and restaurant run by the Law Courts Society that is located in the Supreme Court Building directly adjacent to Robson Square. When Chamli saw the venue, he knew immediately that it had the potential to become a world-class setting for the city’s poshest events. 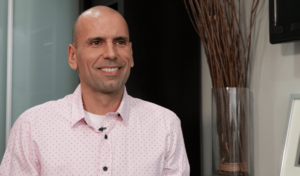 “The Law Courts complex is, in my opinion, a testament to Vancouver,” he says, citing the work of world-renowned architect Arthur Erickson and landscape architect Cornelia Oberlander, the Vancouver natives responsible for the building’s design. “It’s a one-of-a-kind structure—an homage to Vancouver architecture. The building looks more modern as time goes on, and the landscaping makes it come alive in all seasons.”

Chamli’s vision was to bring high-end hospitality to the space—quality and service as prestigious as the design. His standards were high. The Hilton Orlando’s proximity to Disney World meant that during his tenure there, Chamli was expected to uphold not only Hilton-level standards of hospitality, but Disney-level standards. And if the hospitality industry had a Rolls Royce, Disney would be it.

Disney may seem like a strange juxtaposition for the Law Courts Inn, but the demands are more similar than one would think. Both require service professionals to bend over backwards in order to convey an experience that lives up to the expectations of the clientele. At Disney World, that expectation may be “fun, friendly, and always with a smile,” and in no way is it acceptable to ruin or tarnish someone’s experience of Disney World. The Law Courts Inn has different but similarly exacting criteria.

“Managing events in the Great Hall is a very intricate situation,” explains Chamli. “You’re managing the needs of the customers, which are very high, but also the needs of the government, of the landlord, and of the justices in the Law Court Society who have their own standards for events.” It’s highly political and highly complex. Urgency, professionalism, and adaptability are key.

To find the right catering company for the job, Chamli set up a bidding process for management of the Great Hall. Many of Vancouver’s highest profile caterers applied. After an exhaustive evaluation process, Chamli chose Emelle’s Catering to be the exclusive caterer of the Great Hall. They weren’t the largest, nor the best known, but after meeting the owners and speaking with the team, Chamli knew they were the right choice. “We felt nurtured and cared for, like part of the family, right from the get-go,” he says.

In the years since, Emelle’s has catered weddings, corporate events, association events and graduation ceremonies in the Great Hall, and they’ve never failed to impress. “They do business with integrity,” says Chamli, who loves Vancouver but has a little less love for the laid-back working style so common on the West Coast. “People take a day to return a phone call, two to reply to an email,” he laments.

“You need an icon of Vancouver catering to run a Vancouver icon.”

From general communication to sending contracts, following up with clients, organizing tastings, or attending site visits, they’re on the ball. When challenges or changes arise, some contractors turn to the fine print in their contract. “That’s never happened with Emelle’s. Whenever we’ve encountered challenges, Emelle’s has always, always taken the high road.”

In Chamli’s eyes, Emelle’s embodies the best of old-fashioned values. They do business on a handshake, and their word is worth its weight in gold. “This translates from the top-level management down through the entire line of their team,” he says. “They provide service that routinely exceeds our expectations. But then I suppose you need an icon of Vancouver catering to run a Vancouver icon.”