Beyond Customers, This Chef Serves His Team and His Community 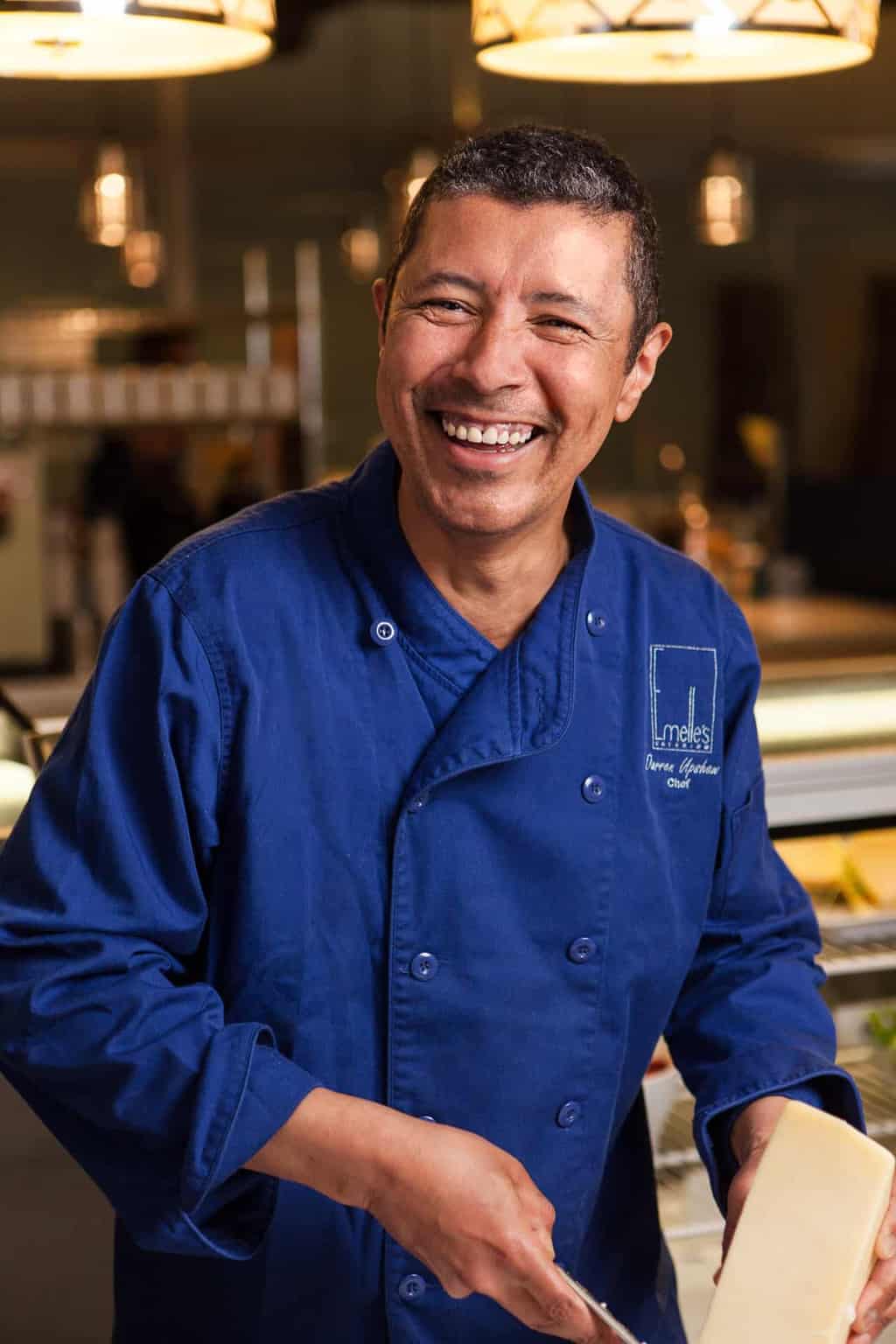 Emelle’s Head Chef Darren Upshaw reflects on 16 years spent serving the Vancouver community both in and out of the kitchen.

On a chilly day in November, Darren Upshaw hoists a ten-litre bucket of freshly made chicken vegetable soup into the back of the Emelle’s Catering van. He pulls his coat tight, rubs his hands together, watches his breath crystallize on the morning air, then proceeds to load another tub. There are about 10 in total. He and the kitchen staff spent the last three days peeling locally grown vegetables and breaking down farm-fresh chickens to build the hearty stock that, in moments, will be on its way to Vancouver’s Downtown Eastside.

For the fourth time this year, Upshaw climbs into the passenger seat next to Emelle’s CEO Mary Lee Newnham, who ferries the soup and team to a Downtown Eastside street where they proceed to offload, reheat, and serve. It’s 10am. A queue forms. Upshaw and the team get ready to ladle until the pots are dry.

“It feels good to help the community in that way,” says Upshaw, who began working with Emelle’s shortly after he moved to Vancouver 16 years ago. When he first arrived, fresh from running the kitchen of Rebar, a vegetarian restaurant in Victoria, he envisioned himself working his way up the ranks of Vancouver’s restaurant industry, maybe even owning his own place. But instead of moving on after a few years at Emelle’s, he stayed.

“It’s inspiring to work on a team where every person, from the owner down, wants to give back,” remarks Upshaw.

That culture of giving back has strongly influenced Upshaw’s personal growth and character. “Emelle’s is very inclusive. Every creed, every colour, we have it,” he says of a diverse team that represents a spectrum of physical and mental abilities, sexual orientations and cultural backgrounds. Training, coaching, and learning to communicate effectively in that environment has expanded Upshaw’s concept of inclusivity and what it means to inspire and support others. “I’ve learned a lot about myself,” he says. “Things I never knew I had in me until I was put to the test. How to help others along. Let them know it’s okay [to be who they are].”

Whether it’s supporting individuals or the public at large, serving the community is what Upshaw and his colleagues really take to heart—the people, the economy, the environment.

As head chef, Upshaw cares about the ingredients he’s working with and has been helping Emelle’s to source local, fresh ingredients long before it was trendy to do so. Moreover, as a former vegetarian, it’s important to him that the farmers they work with are using ethical, sustainable practices. From the Lower Mainland’s ripest seasonal vegetables to sustainably raised local pork, each pantry item is curated with an eye to reducing Emelle’s ecological footprint and positively impacting the livelihoods of B.C. farmers.

“We also recycle anything and everything,” says Upshaw, “which not many cafés and catering companies do. Our food waste, metals, glass and plastics are picked up every week, and our dishwasher personally takes the pop cans and bottles to the depot.” Doing so may not be legally mandated, nor industry standard, but Upshaw and the team at Emelle’s work by their own standard. If put into words, it might read: Whatever can be done is what we’ll do.

It’s 11am. The soup pots are nearly drained, and the lunch line has thinned. Upshaw and the team begin packing up. He knows it’s impossible to feed everyone, but he also knows that’s not what it’s about. He says simply, “We serve as many people as we can.”