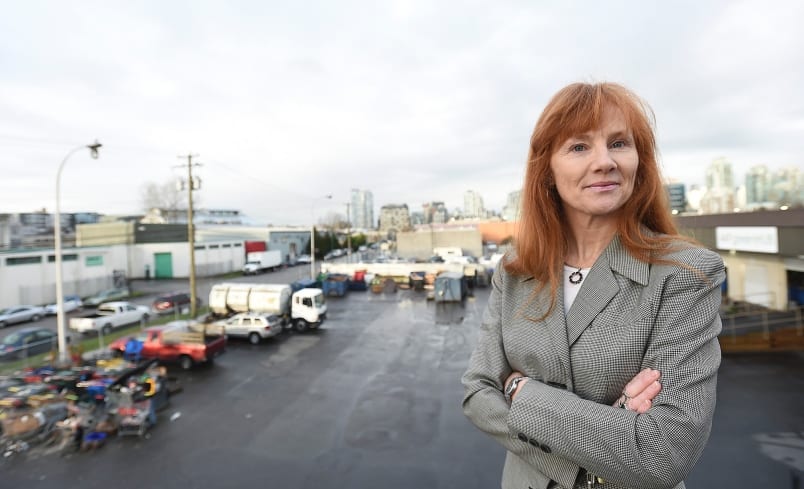 Before anyone else was on board with the Green Revolution, Recycling Alternative partnered with Emelle’s Catering in and out of the kitchen to reduce waste.

On collection day, blue recycling bins line back alleys across Vancouver. In grocery stores and coffee shops, the triangular recycling symbol marks bottles, cans, bags, cups and all manner of disposable items. Thirty years ago, this wasn’t the case. “There was practically no recycling in Vancouver at the time,” says Louise Schwarz, co-founder of Recycling Alternative. “Citizens weren’t aware of what to recycle, how to recycle, even of the need to recycle.” It’s hard to imagine, today.

Back then, when Schwarz launched her recycling company, the very notion of recycling was considered a fringe idea. To her, it was imperative. “Years ago, I had an epiphany,” says Schwarz.

“When we talk about trash, we always say we’re going to ‘throw it away.’ But where is away? There is no away.”

Schwarz and her business partner decided to go after the big fish, the commercial businesses (offices, restaurants, shopping malls, property management companies, and so forth) that produce high volumes of waste. Theirs was one of the first companies to offer collection and waste reduction services in Vancouver and today it remains one of the last locally owned recycling companies in the city.

One early adopter of their services was fellow locally owned company Emelle’s Catering, which Schwarz and her colleagues frequented at lunch and snack time. Through a series of personal and professional connections, Schwarz was introduced to Emelle’s owner Mary Lee Newnham, who, as luck would have it, was right out there on the fringes as well.

“Mary Lee and her team were very aware of wanting to do the right thing in terms of their own production and waste,” recalls Schwarz. Recycling Alternative began working with Emelle’s, helping them to establish a robust green program that included recycling, composting and waste reduction in the Emelle’s kitchen as well as consultations on how Emelle’s could reduce waste when performing on-site catering.

The two companies crossed paths out in the community as well when, nearly two decades ago, they were both brought in to work Bard on the Beach—Emelle’s working the front end, providing delicious food, and Recycling Alternative working the back end, performing all of the recycling, waste diversion (to compost), and disposal education. Their mutual commitment to recycling presented a unique opportunity for some environmentally minded collaboration, so together Recycling Alternative and Emelle’s engaged in what Schwarz calls “trash busting.”

Over the course of several Bard seasons, the companies worked very closely in an effort to reduce waste at the festival. “How you manage your supply chain is very important. Our aim was to divert waste and make sure it didn’t have to go to a landfill,” Schwarz explains. From condiments to cutlery, no detail was overlooked. They assessed the food that Emelle’s would be serving, determined the packaging needs, and then sourced compostable options. Through this partnership, they divert about 70-75% of waste (that’s roughly 20,500 pounds of material) out of the landfill every season at Bard.

“Our signature event, Bard’s Bard-B-Q and fireworks is 95% completely compostable. From the food to the plates and even the cutlery! It has dramatically reduced our reliance on using the landfill,” says Ava Forsyth, Director of Operations at Bard on the Beach.

Vancouver’s environmental consciousness has certainly grown up over the years. In 2011 the city launched an urban sustainability initiative titled the Greenest City Action Plan with an aim of becoming the greenest city in the world by 2020. While this is a welcome push in the right direction, “trash busting” is still a voluntary act, meaning the green revolution still needs leaders.

After nearly 20 years of partnership with Emelle’s both in and out of the kitchen, Schwarz has every confidence in their leadership.

Few restaurants or caterers have a green program as comprehensive, and their recycling acumen is top notch.

“When I’m at an event and I see they’re catering it, I know that behind the scenes they are really looking at their waste impact,” she says. “Working with a caterer like Emelle’s that’s committed not only to the amazing food they’re providing but also to reducing the footprint of that has been a great match for us and what we do.”